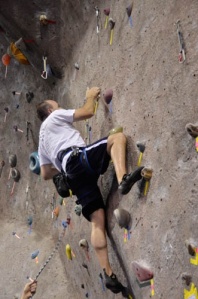 I haven’t been lead climbing long. I got into it because my buddy, who is a far more established climber than I, talked me into it. That’s cool, I’m up for a challenge. So I’ve gotten the hang of lead belaying. We have pretty good communication, which anyone will tell you is important. When I’ve climbed, my clipping is mostly ok. Sometimes it sucks.

That was not the case on this particular climb. Only a 5.8, I was climbing and clipping like it was my job. Until I got to the second to last clip, that is. There’s this particularly reachy point right at the top of the climb. Lots of holds, but the distance between clips seems enormous. So I’m holding with my right hand and taking huge bites (literally) of rope with my left trying desperately to get the damned rope into the increasingly tiny quickdraw. I could reach it, I could stab at it, but the problem was that the arm holding my weight was bent and starting to fatigue. It started to become apparent to me that I was going to come off the wall.

I’ll take a moment here to point out, that prior to this, while I have been aware of the lead fall, I’ve never had to experience it. I’ve belayed my buddy when he has come off, I’ve watched videos, I’ve read books, I understand that if my belayer is squared away (fortunately for me he is), while it looks terrifying, I’m not going to die. I also knew that my irrational, “I’m just not gonna fall” mentality was going to catch up with me and eventually I was going to have to do it. I knew all of these things logically, but that night, on the wall, I was fairly certain that I, was in fact, going to die.

So there I am, my arms are shaking, and I’m pretty sure there’s no way I’m going to miracle the rope into that quickdraw. Like most things in life, the decision presented itself. I was going to have to let go. As you can imagine, I wasn’t pleased with this unfortunate turn of events during, what was up until that point, a very successful climb. The last thing I remember thinking was, “just don’t scream like a bitch.”

I let go. I think I fell all of 10 feet. Maybe less. Who knows, but as I was swinging there in my harness, I felt this weight lifted off me. I had taken my first fall, handled it reasonably well, and had come out the other side. The fear of the lead fall had been taken away. My buddy lowered me down with a big smile of his face. “Welcome to lead climbing dude.”

Well said. Hell of a good night. Carry on.