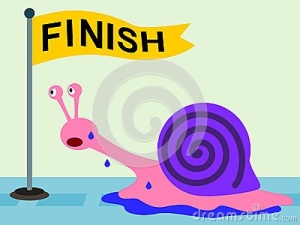 There are a lot of words I could use to describe this run. Most of them have four letters and would probably disappoint my mother. Suffice to say, it was ugly.

At the moment I am in Las Vegas on business. I like to say “on business” because it sounds fancy and like I lead some interesting jet setting life. Jet setting maybe, but interesting? I don’t know. Anyway, we got in late last night from New York and are headed back out this afternoon. Not a long layover, but enough time to get a little rest and go for a run. Generally speaking, I don’t usually run on my overnights. Its not that I don’t want to, but most of the time I’m somewhat unfamiliar with the area, but mostly, I’m just being lazy.

Let me take a moment to be clear about something. I am not a runner. I’m a guy who runs. To me, there is a very distinct difference. That said, I’m trying to become a runner.

A few months ago, a good friend of mine signed up to do a half marathon. Impressive, right? Sure. What was more impressive to me was that in all the time I’ve known her, nearly 20 years, she has never, to my knowledge, been interested in running, or really even liked being outside. Camping is a four star hotel. Get it? That’s cool, i dont judge, but it made her decision to do the race all the more surprising. So, she went from no running to a half marathon, training through a nasty New England winter. If she can do that, I decided, it was time to get off my ass. So, I signed up for my first half marathon coming up in November and started training.

I started running a few years ago when I was unemployed. I couldn’t get a job in aviation so I set out to become a police officer. That involved taking my out of shape, overweight, and atrophied body off the couch into the gym and out on the road. My friend’s husband, also a close friend, helped motviate me to get started. I always thought it was kind of him to come out and shuffle along at my slow run/walk pace as I tried to get into better shape. As I got better, I ran a few races, not competitively, my longest being a 7 miler in Gloucester MA. It was a tough run, mostly hills, but well worth it.

Not long after that I ended up landing a job in aviation (talk about slipping through the cracks), and started running less and less. I had no motivation to keep going. My friends had a daughter and he was understandably around less to serve as a running partner. I was getting bored with it, and I let myself slack off. Until this year.

So the half is on. I’m six weeks into a training program and today, in the desert heat, I decided to get my 30 minute run in. It was ugly. Did I say that already? I ended up doing a little more than I needed, mostly because I was slow, but also because my route ended up being nearly a mile longer than I anticipated. I ran a long loop that took me down the famed Las Vegas Blvd. That’s right “The Strip.” It occurred to me as I callously shoved tourists out of my way (slight exaggeration here) that running down The Strip is probably like one of those zombie themed 5k races; people blindly shuffling from one casino to the next, unaware of their surroundings, and looking to feast on brains…… Ok, maybe not brains, but at the very least, the next buffet.

So the run sucked. Hard. It was hot. The elevation is a couple thousand feet higher than I’m used to, I’m not well rested… Excuses, excuses. I was slow. As I finally came to the end of my workout, tired, winded and dehydrated, I shuffled in to the AM/PM gas station next to my hotel. I grabbed two bottles of Gatorade from the fridge and went to the register to pay with my Amex. “Debit only,” the attendant says, “We’re not set up for credit.”

You’re kidding me. What gas station doesn’t take credit? Really? Really. No credit. Accepting defeat, I headed for the door when an older woman comes up and asks me if I don’t have any money. “Only my credit card”, is my deflated reply. And then, surprising both me and the attendant, she insisted on paying for me. I immediately objected, saying that I appreciate the offer, but ill be fine. “No,” she insisted, “You’ve obviously been out working hard, let me take care of this for you.”

I don’t ever really expect much from people. It’s not that I’m jaded but…. Well ok, maybe a little. We are subjected to so much negativity from the media these days: break ins, violent crime, tornadoes, dogs and cats living together; that it’s not that I expect the worst out of people, I just don’t really expect anything at all. So here was a nice lady, who out of the kindness of her heart helped out a total stranger who just needed to rehydrate after a tough run. I was humbled to accept this small, random act of kindness from a woman I’ll likely never see again. “Have a blessed day,” was the last thing she said. I again thanked her profusely, and made my way back to the hotel.

So what’s the point? Pay it forward? Perform random acts of kindness? Go to church? Don’t be a jaded jackass that hates people? Probably all of those things. But mostly, help someone out who needs it. Even if its just $5 for two bottles of Gatorade.