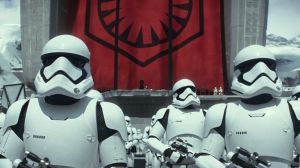 …is freaking the fuck out. Last night, the interwebs told me, and I assume everyone else, that there’s a new Star Wars trailer coming out tonight during Monday night football. It’s Monday night. I seriously can’t wait.

Ever since the last trailer was released I have been giddy with excitement over the next installment in the saga I think we all assumed had been thoroughly homicided by George Lucas. That was several months ago. Just imagine what my wife has had to endure… Anyway, the basis for this over exuberant enthusiasm is that the fact that the director is JJ Abrams. I thought the work he did breathing new life in to the Star Trek franchise was nothing short of amazing. Yes, we all know Spock wasn’t supposed to be the one to scream “Kahn!!!!!” But he did, and he kinda killed it. Let’s move on. So now JJ (we’re on a first initials basis btw) is picking up the lifeless body of our beloved Star Wars, and I hope, going to produce something equally mind blowing.

So, you could say I’m excited. Unreasonably so. I have spent the last few months actively NOT buying every Star Wars related item that has come my way. I mean, do you know how many Stormtrooper and Darth Vader coffee cups I haven’t bought? I have to pay my mortgage, you know. The one exception is a pretty kick ass Stormtrooper bag tag for my flight bag… That I went to four stores to find.

I’m also the Captain. Yeah, that’s right. And actually it was six stores.

So there it is. I’ll likely wait until I can find the trailer online so I can watch it no less than seventy-two times to squeeze every out every possible detail. We are in for a long night, people.

By way of full disclosure, if it’s not obvious, I’m clearly not a film blogger and I don’t want to pretend to be as such. For solid reviews of television and movies please pay a visit to my friend Dave’s blog at: I Am DB. He does some great writing and I’m pretty sure he’s the guy that’s going to kill a review of this film. Me? I’m just a grown man who’s boundless enthusiasm and cockeyed optimism about a new Star Wars movie just wasted five minutes of your time.

And I’m not sorry.