The engine rumbled to life and I put on my helmet. Before I even climbed aboard the Bonne I knew this was going to be a long day. If I’m going to be honest, I probably planned this trip the day I bought my first bike. And now, three years later, I feel like I’m ready for it.

For as long as I can remember, I’ve wanted to stand on the summit of Mount Washington. At 6288 feet, the peak of this geological behemoth stands as the highest point in the eastern United States. Up until three years ago, I assumed that would be the result of hours of laborious hiking. While this is still a goal of mine, that venture been put aside many times for a multitude of logistical reasons, namely the investment in time, which I have in limited supply. Fortunately, there’s another way to reach the top.

In 1861 a team of engineers completed and opened to the public the Mt. Washington Carriage Road. Starting at an elevation 1527 feet, the now renamed Auto Road, climbs 4618 feet over the course of 8 twisty miles, which boasts and average grade of 11.6%, and no guard rails. Naturally, the The Auto Road makes standing on the summit a far more attainable goal, and thus attracts thousands of tourists every year. This year, that includes me. Driving up the mountain always seemed like cheating, but riding up the steep, winding, partially dirt road notably lacking guard rails on two wheels adds a level of adventure that was right up my alley.

While the engine was warming, I double checked my gear. With everything strapped securely in place, I raised the side stand, dropped into first and rolled out of the garage. If I followed Google Maps, it was going to take me three hours of freeway riding to reach the base of the mountain. But I wasn’t going to do that, was I? Nope, the route I was going to take was going to add an hour, but an hour well spent. My plan was to take Rte. 93 up to Lincoln and then ride the Kancamangus highway east to pick up Rte. 16 north to Gorham and the entrance to The Auto Road. Kind of killing two birds with one stone. The Kanc is one of the most highly recommended motorcycle roads in New England. Cutting through The White Mountains, it provides beautiful scenery and 32 miles of sweeping corners and one pretty exceptional hairpin turn. It’s not Stelvio, but for New Hampshire, it’s not bad. But first, I had to get there.

Last year, I reached the Kanc by way of back roads. Between the quaint New Hampshire towns and the long stretches of scenic deserted roads, staying off the freeway really was the best way to go. The downside was that it took twice the amount of time. Since I was going all the way to Washington, it made the most sense to take the freeway and save myself a little time. I settled in at comfortable 65-ish and maneuvered through the busy interchanges of Manchester and Concord. As I left the Capital I was pleased to notice the traffic melting away. While trying to stay engaged in the long ride, my scan of my immediate area often revealed that I was the only person on the road. Again away from distracted drivers inadvertently trying to kill me. Occasionally a car would pass, and I’d be alone again motoring north towards the mountains.

With a quick stop for gas it took just under two hours to reach Exit 32 in Lincoln, New Hampshire. Being the creature of habit that I must admit I am, I pulled into the usual gas station to top off the tank and then rolled next door to the all too familiar Dunkin Donuts on Rte 112 for a quick bite to eat. After checking in with Beth I strolled back out the Bonneville to get set up for the next leg of my journey. I had a general idea of where I was going, but I didn’t really care that much because finding the way is part of the adventure, right?

So I went East. As it leaves Lincoln, The Kanc offers a series of tree lined sweeping curves for several miles, which were pleasantly devoid of other vehicles. There are few things I love more than having a road to myself. Without pushing the speed too much I finally arrived at the famed hairpin turn that starts your climb into the mountains. I’ve run this corner only a few times so I took it kinda easy, but not so much so that I couldn’t enjoy it.

Slow. Look. Press and Roll. What up MSF.

I climbed higher over the pass and on that beautiful afternoon I was rewarded by a clear view of the White Mountains. There are plenty of places to stop and enjoy the view but time was tight and unfortunately I couldn’t stop to take it in. Disappointing perhaps, but I had a mission and I was pretty sure the view was going to be much better at my destination.

The Kancamangus Highway comes to something of an unceremonious end at the intersection with Rte 16. From here all I had to do is go north and I should run straight into the Auto Road leading up to the summit. While it turned out to be slightly more complicated than that, I managed to find the way with a minimal amount of u-turns. After another hour of empty roads and amazing views, I spotted the famed sign signaling the entrance to the Mt Washington Auto Road. From the time I left my garage, it took four hours to get there. It was already a hell of an adventure and I hadn’t even done the hard part.

I rolled down the driveway and pulled off to the side. I was nervous. I knew that guys on Harleys ride this road and don’t go plummeting off the edge, even with a mile of dirt road, and not a guard rail in sight… At least not that I heard of anyway. I texted Beth to let her know I was heading up and if I could I’d sent her a text from the top.

I’ll start by saying, this road is narrow. Like, a car and a half, narrow. When I crossed the bridge and paid the attendant, he reminded me that the speed limit was 15 mph. Yeah that not gonna be a problem, I laughed. There’s no rush to get to the top. I stayed mostly in first gear for the first half of the way up, and felt fairly comfortable winding through the blind corners, at one point pulling over for an adventure rider to pass.

With the increase in elevation, the trees began to shrink and eventually melted away. I was finally able to take a look around. Although the haze was thick that day, what I could see of the view was spectacular. The pavement abruptly stopped and the dirt began. I stole quick looks at the mountain ranges around me while simultaneously trying to maintain my focus on the road in front of me. I had a mile of climbing winding dirt road ahead, with the sun in my face, and vehicles passing from the opposite direction, so staying engaged was critical. I was soon reunited with my friend the pavement and the corners in the road loosened up. I could see the summit buildings in the distance and (finally) clicked into second gear. My pace quickened a bit as I closed distance to the top, and in short order the road ended at the parking lot. I rolled over the gravel to a spot with a nice view and killed the engine.

And for a moment, I just sat there, looking through my visor at the range ahead and listening to the quiet ticking of the engine as it cooled. I breathed in deep, removed my gloves, and took a picture. 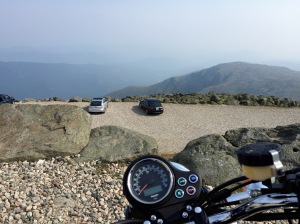 It was about 3:30 pm, so I had plenty of time to look around before making the descent. It took so long to get here, I wasn’t about to rush. First things first, I walked right to the summit marker. And there was a line… I had to laugh. I waited patiently while other people stood at the marker and took their photos. A group of Appalachian Trail hikers arrived, and I offered to take their picture for them. More than anyone else on the summit that day, those four kids earned that picture. I was happy for them and their accomplishment, and maybe just a little jealous. They kindly returned the favor, I wished them a safe journey and walked off the marker to let the next tourist take their picture.

I walked to all the corners of the summit, making sure to stop and take in the view, hoping that I would be able to remember this day in the months and years to come. Before I knew it, an hour had passed and I knew I had to go. I walked back to the Bonne, politely passing a family with two small kids walking down the stairs. The dad, who looked younger than me, caught up with me as I was organizing my pack for the return trip.

“That’s a beautiful bike,” he said. “I always thought the Bonneville was a much nicer looking bike than a Harley.”

Who was I to argue? I thanked him for his kind words and got ready for the ride down. The road less of an unknown now, I just had to make sure I managed my engine speed so I wouldn’t overheat the brakes. The views I couldn’t see on the way up I was fortunate to have again for the ride down. I ended up hung up behind a slow going Mercedes for most of the way, but honestly, I didn’t mind. The slow pace allowed more time to take in the view. 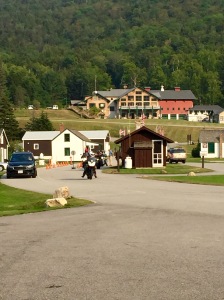 Twenty-two minutes later, I arrived in the parking lot just as a new group of riders rode passed the entry gate and headed up the mountain. I stopped at the little convenience store to text Beth and have some water. It was nearly 5:00 pm, and I had three hours to go before I would be home. Initially my plan was to run The Kanc again in reverse, but I was going to lose daylight fast, so I opted for the fastest route home. Which, I should add, was totally worth it. I found more empty roads and as the sun set across the valley I opened the throttle, and rode for home.

The Ton. Yeah, so there’s that. I read somewhere that if you have a British bike, you have to “Do the Ton.” To the Brits, this means going 100 mph, and apparently it’s some kind of rite of passage. With the freeway empty of all traffic, I made my attempt. It took three tries and a full tuck, but I did it. Sorry, there’s no picture. I did, however send Johnny this text when I stopped for gas: 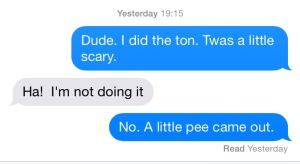 Yup, never again, but check it off the list.

I rolled back into my garage just after 9:00pm. The Mt. Washington adventure was the longest of any moto adventure I had embarked on. I learned much about myself, and my bike and what it could do. It was one hell of a day, and even though I didn’t walk up that mountain, I felt the the adventure was worthy of the photo taken at the summit marker. Next time, I’m doing it on foot.

What I didn’t know that night as I lay in bed with the dog snoring beside me was that this epic journey would be the last great adventure with my Triumph Bonneville. What a way to go out though.