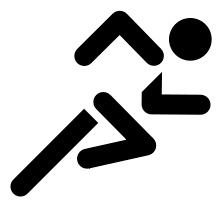 I had a plan when I left for the rail trail. I was just going to take it easy. The planned run was seven miles, and since it was the longest run I’d attempted since I trained for the half two years ago, it made good sense to not try to kill it, just get it done.

I picked up the Nashua River rail trail in the center of Pepperell, Massachusetts. Heading west, it’s flat, well shaded, protected from traffic, and runs pretty much forever. Ok, not like, to Narnia forever, but long enough. The total length of the trail is 12.3 miles, so it definitely fit my needs for distance running.

So, I had a plan, a route, this old ass iPod, and as I got to the beginning of my route, I thought, “To hell with going easy. I’m just gonna see how fast I can get this done.” The week before I had pretty well destroyed my 5k time thanks to the Hollis Fast 5k, a mostly downhill course that draws thousands of runners, all there to beat their personal bests. Sure you can’t use the time for anything official, but it’s a great confidence booster, and a great event. So, armed with some extra confidence I set out.

I’m not going to drone on endlessly about the minute details of a long run because, well, no one wants to read that. However, I will say this: Something I’ve noticed while out on a run is that every now and then, the absolute perfect song comes up in the playlist, and it’s exactly the thing I need to hear at the exact moment I need to hear it. On this run, I had two of these back to back. Somewhere between miles four and five when I was starting to lag a little, these two gems popped up, and got my intensity back up: